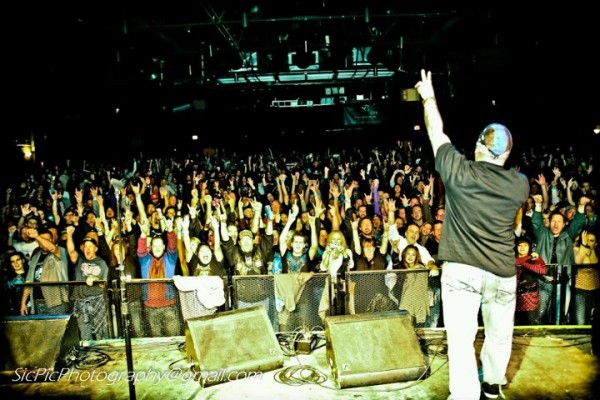 Hmmm tough question. We never like to spill our secrets, but one piece of advice I can give is..think local, stay local…You have to expand your visions and invest in yourself. Pitfalls Ive seen is worrying about what others think (not fans) everyone will down you when pushing music. I learned a great tip from a big artist. He told me, when you become successful your hometown scene will turn their backs on you. We have not seen this and hope not too, but I can understand the theory. The odds of getting signed and becoming famous are really slim, but always follow your dreams. Also play good gear, don’t play garbage lol.

Best gig to date for While She Waits was playing in the town of Kingman on our last tour. Awesome people and many have became dear friends of ours. Those freaking people know how to party…But it is Kingman Arizona, what the hell else are you gonna do there

Probably our show with Fuel. We had just gotten off tour and took a few week break. We played very loose and we all knew it. I actually forgot the first line one of our songs hahahah. I mumbled through it lol

James Cole- I do tattoos. Aaron Belk- This guy loves to fart, man he is an expert at farting. Blake is an absolute expert in dressing like a clown. A female clown hahah.

Tim Rooen, this freaking guy throws a party for everything. Every weekend is a reason to throw a party.Now Tims wife is expecting so we can imagine the parties to come haha Tommy just had a new son, that his is hobby and pride and joy of his life.

Uggggg don’t hate me people lol. Too many bands follow what everyone else is doing. Its ok to have influences, but all the new music sounds the same…and you extreme metal heads..expand your music a little lol. I love John Denver for gods sake hahahah

James Cole is old as dirt, was a Parole Officer and can crop dust a crowd like no other.

Aaron Belk collects trolls or something like that wtf? Hahaha

Why is it when a man is wiping his butt and the toilet paper rips, his first instinct is to smell his finger? Hahaha you  re laughing because you have done it. Stay real out there homies and wash your darn hands