CHICAGO (Courthouse News Service) – Cheap Trick’s disaffected drummer and its former manager claim in court that the three other band members owe them hundreds of thousands of dollars in tour proceeds and unpaid loans.

“Plaintiffs Carlos and Frey are, respectively, the drummer and manager for the world-renowned rock band Cheap Trick,” the complaint begins. “Plaintiffs are forced to bring this action against the three defendants (who are the other members of the band) due to defendants’ outright refusal to account for, or pay, hundreds of thousands of dollars which are owed to each of the plaintiffs, or to otherwise comply with their obligations to plaintiffs.”

The lawsuit claims that according to consent agreements signed by all four members of the band, “Carlos is no longer required to participate in live performances by the band, but remains a full member of the band, and is entitled to ‘continue to receive all remuneration due to him under the [Cheap Trick Companies’] Agreements (including, without limitation, all remuneration that would have been paid to him had he fully performed at all of the Live Performances) without delay, penalty or offset.”

Carlos claims the other members of the band have failed to honor the agreement, and owe him hundreds of thousands of dollars “by, among other things, refusing to allow Carlos to participate in any of the activities of the band (including the recording of a new studio album), entering into numerous contracts on behalf of the Cheap Trick Companies without Carlos’s consent, and otherwise preventing Carlos from participating in the management and operations of the Cheap Trick Companies.”

In June 2012, the three other band members also “purported to terminate Frey as the band’s manager,” the complaint states. “However, pursuant to the terms of the unanimous consent agreement, this purported termination is null and void because Carlos did not consent to it. Further, at the time of this purported termination, the band owed Frey and SPM $160,000 in deferred compensation, which defendants have improperly refused to pay.” 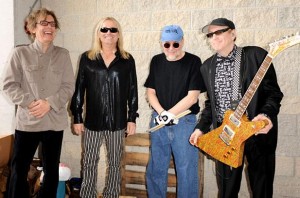 “Notably, defendants have failed to provide any justification whatsoever for the wrongful actions which they have perpetrated against the plaintiffs – as these acts are plainly unjustifiable (not to mention unconscionable).

“Enough is enough. Defendants should be ordered, inter alia, to account for and pay plaintiffs all the money they are owed, and to compensate the Cheap Trick Companies for their acts of self-dealing and other corporate misfeasance. The Court should also enjoin defendants from further misuse of the trademarks and other assets of the Cheap Trick Companies, and grant other appropriate relief,” according to the complaint.

for the rest of the article go here :