Once again many thanks to James for the interview!

Hi, my name is Brooke Bell and I am the singer, guitarist and autoharp player for the band Tornado Rose. 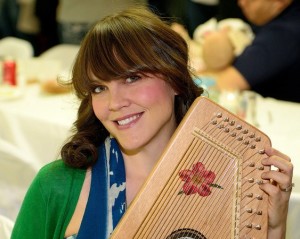 As far as our style of music, I would consider us alternative-bluegrass, alternative folk, alternative rock, alternative alternative. It is so hard to classify our style but we don’t really care to. The scene gets too caught up in what things are called. It is inherent human nature to find patterns and classify things, it is our way of making sense of the world, it preserves our illusion of control and it helps us function amid the chaos and mysteries of the universe. When you focus on what something is called, you lose sight of what it actually is; its nature, purpose, essence is lost to a mere word, a word we made up, which may mean something different to you than me. Music is a way to transcend that; genres, grammys, top 20s are only efforts to systematize and quantify that which must never be systematized or quantified. I think we see plenty of evidence of that corruption in some of what passes for music in the mainstream and the stifling effect it can have on creativity. 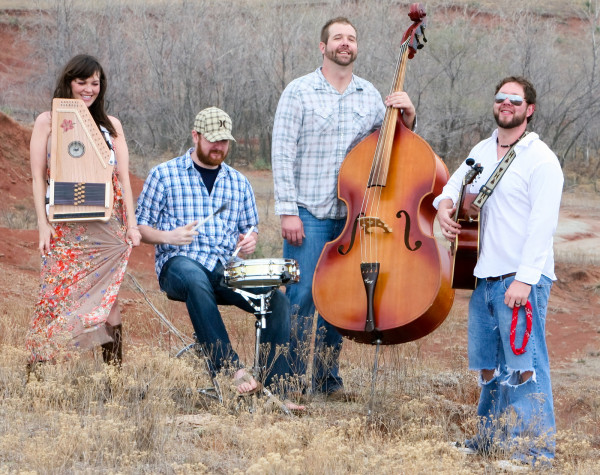 I would have to say Eryka Badu and Jill Scott are two big ones, as is Nina Simone. Jill Scott is a poetess first and foremost and her first album, ‘Who is Jill Scott’ changed my life. It was the real thing, baby. No candy pop, no sugar coat. The song she wrote ‘The Thickness’ gave power to a soft and vulnerable place in my soul. Eryka Badu is a warrior philosopher, she comes from a very deep place and her lyrics move tectonic plates, they are so powerful. When she sings ‘peace after revolution’ it stirs up something. She isn’t singing about being cheated on and coming back for more, she isn’t trying to sell me Reeboks or Citibank cards. Her music is rebellion. I love Bob Marley too. The roots of reggae music look a lot like the roots of bluegrass music and Americana. His music reminds me that we are all one family. I and I.

Forget money. Do what you do because you can’t not do it. Do it because you would do it if there weren’t a single person around to hear it, let alone pay you for it. Forget Cristal and Benzies- that’s the lie. Imagine the first humans to make a percussive beat on an animal skin under a primeval moon and the first to raise their voices in song, dancing around a fire. Imagine a force powerful enough to transcend our ideas of time and our illusion of being separate from one another- that’s the truth.

Where to begin? There was the time the lead singer face-planted before a big gig in Lawrence at the world-famous Bottleneck. (She took it like a champ but still refused to use the disgusting toilet in the green room, no matter whose venerated ass had sat it) My personal favorite was the long weekend we spent in Boulder at the foot of a mountain. Songs were hanging so heavy in the air there that we were able to simply pluck them like overripe apples. ‘Ripeness is all.’ As Shakespeare said. It was a beautiful moment in time. Ripe with perfection.

We were hired to play a 50th wedding anniversary by mistake once. It was horrible. They thought we were a country band and people were coming to the stage between every song to request Garth Brooks or some such nonsense- basically anything else at all. To make matters worse, it was in an auditorium just like the one you probably had in highschool too, so it was basically like every nightmare I ever had growing up. Except I wasn’t naked.

Pictures of boobs, for sure. I’m so glad I’m not the only one! Besides bad poetry and decent prose, you mean? A little amateur astronomy on a clear night, the occasional feat of athleticism when the mood strikes, a little dabble in Eastern philosophy here, a smattering of ancient Chinese mysticism there. A little palm reading on occasion and if you punch me very slowly, I can defend myself with Kung Fu. Wing Chung style, naturally. Who do I look like, Jackie Chan?

Learn how to make a free Electronic Press Kit

We hail from Wichita, Kansas and, while the heartland is typically associated with bad country and top 20, the local scene has gradually been improving over the last few years. There is now far less demand for bad cover bands and more appreciation of great original material and lively stage performances. I blame the internet. There is no longer any excuse for liking bad music. Plus, with Spotify, we can publically shame anyone who’s playlist resembles that of a pre-pubescent suburban tweenager- and justly so. Just look at the difference between satellite radio and local radio- it is like comparing a rocket ship to a dodo bird. The days of two overworked uber-produced songs and 10 pathetically crappy filler ones being able to garner platinum sales of a 16.99 CD because we were all too stupid to understand it was robbery are gone, and good riddance.

Our drummer is a ginger who can rap like nobody’s business and jump like Dick Fosbury, post Flop; I’m talking fucking groundbreaking type shit. He doesn’t need drums either, give him a gum wrapper and a zipper and you’ve got percussion. Our Guitar player is one of the most freakishly athletic people I have ever known; I have seen him play basketball, baseball, volleyball, football- even dodgeball. ‘Dominate’ doesn’t even begin to describe it. I’ve also never seen him get mad; never, not even once. Our bass player is from another planet- Crypton perhaps. He might also be a cy-borg, its hard to tell really. He does more shit in one day than most people get done in their whole lives. One night when we were playing a gig on the road he talked in his sleep: “Where. Where is. Where is the party.” In a perfect robot-voice.

I’m a chick, so I get to hook up with all of them. Cause I’m a giver. That’s how being a chick works, didn’t you know? Poor girls anyway. I doubt the Skipper, Gilligan or Mr. Howell could find the relevant lady-parts with two hands and a flashlight improvised from a coconut. However, there was the Professor…if anyone could grasp the concept of the ‘stimulation gap’, it’s him- that’s just good science. Science!

SEPERATENESS IS AN ILLUSION. OUR INTERCONNECTION TO EACH OTHER IS WHAT IS REAL. MUSIC IS ONE OF THE MOST POWERFUL, PRIMAL FORCES ON EARTH, TEARING AWAY OUR ILLUSIONS, IF ONLY FOR A MOMENT. IT IS THE PROOF OF OUR HUMANITY, OF OUR DIVINITY. FROM NOTHING, SOMETHING. MUSIC IS CREATION, CREATING IS LIFE, THE CREATION LIVES FOREVER.

“ETERNITY IS IN LOVE WITH THE CREATIONS OF TIME.” WILLIAM FUCKING BLAKE