Incredible artist by night. Locked away lonely butcher by day. He sees life from the other side of the glass. His “Tales from the Chop” are real. His outlook is slightly twisted. A part time Bouncer amongst the rows of dry goods when he is not cutting up the day’s morsels. His humor moves at the brush stroke of madness..He is for all practical purposes, a poetic Sweeney John. Hack on! 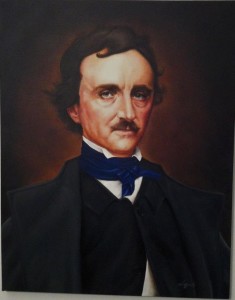 Okay…So, today at work a fight broke out between two female gutter rats (Let’s call them Bubbles and Pee-Eye).
Coming in on the middle of it, I could only assume that it was over who was the better Bingo player.
When I arrived on the scene, Bubbles was armed and ready to throw a can of vegetables (Creamed corn, actually) and poor Pee-Eye only with a purse that was obviously purchased from the 1970’s oversized handbag section of the local trash mart.
The manager and I stepped in between them and amidst the threats and swearing we were able to learn what happened…
The two ladies had been coming down the same aisle from opposite ends and each spotted a discarded scratch off lottery ticket.
Both claimed ownership and the fight began.
The manager took the ticket, examined it and informed them that it was not a winner.
This made no difference to the mouthy, mobile dung heaps, as they continued to go bitchcakes on each other.
The manager told them both to leave the store or he would call the police.
Bubbles screamed, “Call the Law! I’ll put them down, too!”
The manager pulled his phone and the women went silent.
He told them to go off in different directions and to exit the store.
As they were departing, Bubbles made one last statement….”Keep that bitch away from me or I’m gonna kick her in the fish bucket!”
Yep…Fish Bucket.
Double Cola Quote of the Week.