He recently did an interview with Nick Simmons for Esquire magazine… Gene’s advice for future rock stars is to “not quit your day job”.  I actually think he is right about this one. The Rock music business is in shambles. Comments welcome and expected from fellow musicians :). chuck 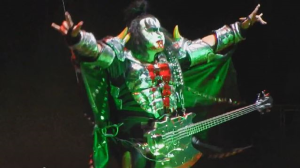 “Don’t quit your day job is a good piece of advice,” Gene began. “When I was coming up, it was not an insurmountable mountain. Once you had a record company on your side, they would fund you, and that also meant when you toured they would give you tour support. There was an entire industry to help the next BEATLES, [THE ROLLING] STONES, Prince, [Jimi] Hendrix, to prop them up and support them every step of the way. There are still record companies, and it does apply to pop, rap, and country to an extent. But for performers who are also songwriters — the creators — for rock music, for soul, for the blues — it’s finally dead.