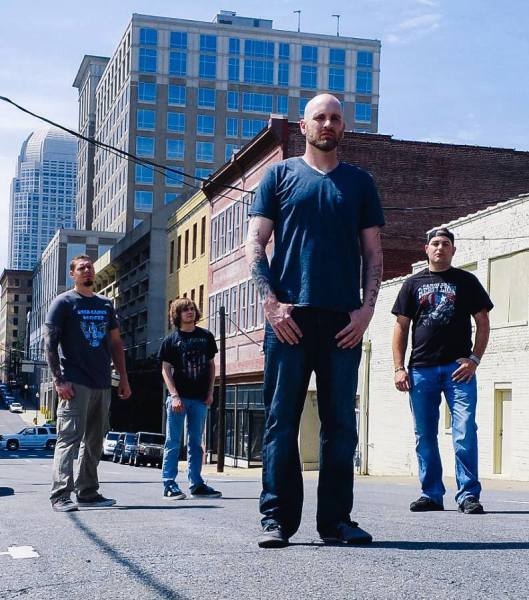 Thank you. We are Adage out of North Carolina. We are a 4 piece group of just normal guys who love to play music; Justin Doyle on vocals and lead guitar, Luke Petree on guitar, Alex Hough on drums, and Johnathan Stowers on bass.

Justin: I would have to say that it all started with a band most haven’t heard of. PFR; (Pray for Rain). My upbringing was very church oriented and I was unable to listen to most things. So I had to improvise. I basically heard them one day, and for some reason I really liked it. They reminded me of a funny Christian Beetles. But it was musical, and it turned me on to singing and playing guitar.

Alex: Some of my biggest heroes are the members of Sick Puppies. I love everything that all of them do, and I’ve met them before. Put one of the best live performances I’ve ever seen.

Luke: I always have a hard time admitting my heroes and influences. Mainly because I sound nothing like them! Really it changes for me pretty often. Over the years I have drawn from Metallica, Korn and Disturbed. But In Flames has been my most recent influence.

Johnathan: Green Day was the first rock band that really caught my attention and diverted me towards that genre of music. I use to put the cd on repeat and listen to it all afternoon while skateboarding or playing basketball in my driveway. After seeing Shinedown in concert a couple years ago in charlotte I would have to say that they are who I look up to the most these days.

Justin: Never give up on the dream. But you have got to work hard and really take care of yourself. Get together with like minded musicians and friends. If you are trying to make it into this business, make sure your demo rocks! Good quality makes a huge difference. Take that extra time and money and get it done right. You will thank yourself later.

Luke: Stage performance and excellent gear are both a must!

Johnathan: I agree with Justin about spending the extra money on a good quality cd. Also before making any big decisions make sure you check with a trusted entertainer lawyer. The music business can be a mean animal.

Justin: Don’t rely on talent alone. It is talent plus it takes hard work. As most great things in life do.

Justin: The greatest gig I have ever been a part of was Livestock in Tampa Florida. We played in front of 35,000 people, and graced the stage with some of our hero’s. The worst gig memory is of a show in Arkansas. We rode out with a fellow band from our area and while on the way the transmission in our van went out. We finally made it to the gig on time, but fixing the transmission had nearly wiped us dry. So we go in to play and realize there is only 3 people here and one woman so drunk she is humping the monitor I’m supposed to be singing directly in front of.   Good times.

Luke: Ha….I gave Justin some bad batteries for his wireless system once, and his guitar dropped out during the opening song….Oops

Johnathan: Before our very first gig as “ADAGE” we were at luke’s house loading up the gear around back into the trailer. It was pouring down rain and after loading the trailer down we realize that the hill to get back out is extremely slick when wet. So after about 30 minutes of digging up grass in the pouring rain in our show clothes…we had to get a tractor to get the trailer up the hill and pulled around front. This whole incident nearly made us late for our first gig.

Justin: I’m a video game nerd. I play shooters and sports games, really anything where I can destroy someone else online.

Alex: Whenever I get the opportunity I do a lot of charity work.

Luke: I used to spend a lot of time in nature cause I grew up pretty redneck..LOL, but now days most of my time is focused on this band and finding ways to make us successful. And yes I have drawn many a boob on dirty windshields!

The rock scene around here has been very warm and inviting to us. It’s not thriving. But it’s not dead. Hopefully we are breathing some life into the rock scene!

Justin: That’s a tricky question. It helps in a way that young people can get themselves out there and make it happen so quickly. It’s a hindrance also because it creates a mindset that it’s easy. And in most cases it’s not. And for a band, it’s a whole different beast

Alex: I don’t think there has been much of an impact at all in the music industry. They’ve given us a couple stars like Carrie Underwood and Kelly Clarkson, but it’s not really shaping the music industry. The Voice has extensively furthered the careers of the judges primarily with the large success of Maroon 5’s latest two albums.

Alex: We all do it. Everyone has either downloaded, listened to, or acquired a pirated song, whether they know it or not.

Johnathan: whatever you decide to do, just make sure you buy our cd. And when your friends ask about it, tell them to buy it too!

Justin: I played soccer for the ODP; (Olympic Developmental Program) and played in Holland for almost 2 years until I got injured.

Alex: I’m a pretty big nerd. In my spare time I like to watch Doctor Who, and play retro video games such as Zelda or Final Fantasy.

Luke: Perhaps the fact that I was an F-16 Crew Chief in the USAF and I also have an FAA Airframe & Powerplant

Johnathan: I show up for practice early just to fish the bass pond that is there. And on nice days, I even stay late after practice.

Justin: Mary Ann. She was still kind of hot and was funny. Gotta love those pigtails.

Alex: None, because I’m too young to know any of the characters.

Johnathan: Umm…did they have a way of shaving?

Justin: I do know about vinyl. I have never purchased one but my dad had a lot when I was growing up. He also had a couple of Laserdisc’s with those.

Alex: I play vinyls at my friends’ and families’ houses all the time. But I’ve never bought one because I don’t own a record player.

Luke: This would go way back to Eddie Rabbits “I Love A Rainy Night” on 45!

Johnathan: Never bought one, but I do remember my mom always listening to “achy breaky heart” all the time when I was a tot.

Justin: Only if he starts talking or singing. I may need him alive later.

Alex: Why would I? His search team would coming looking for him instantaneously, and we wouldn’t be on that island for long.

Luke: What Alex said…..then I would choke him!

Johnathan: Nah, maybe he would save me a seat on his private jet when it arrived. If not, then choking him while he is awake would be the only sensible solution.

Alex: I’d rather personally not talk about celebrities, but her new music doesn’t interest me. If I were to listen to her, I’d listen to what came out in her solo career right after Hannah Montana.

Luke: Never heard of her…..

Justin: Real, live, and slightly off vocals please! If I wanted to hear the cd I could have at home.

Luke: Has to be real!

Johnathan: Real for sure. No doubt about it.

Justin: Rock has got to be the next ‘big thing’, again.

Alex: It seems like garage styled rock is coming back. Distorted vocals and simple catchy riffs.

Luke: Probably Cold or In Flames

Justin: I like to warm my voice up to Andrea Bocelli songs.

Alex: I don’t have any secrets. I named my drumset Jennifer? Does that count as a secret?

Johnathan: I play call of duty till 3 am or later almost every night

Justin: Monty Python and the search for the Holy Grail. In my opinion it’s funniest/dumbest movie I’ve ever seen. It’s a close tie with Young Frankenstein.

Alex: Either Forrest Gump, or anything with Mike Myers.

Luke: Caligula or Eraserhead……….cause they both blew my friggin mind!

Johnathan: Most all of Adam Sandlers’ movies. Big Daddy would be my favorite of his.

Our last question is called “Shout It Out Loud”. It’s were you get to talk about

whatever you want to talk about. So go ahead and “SHOUT IT OUT LOUD”! 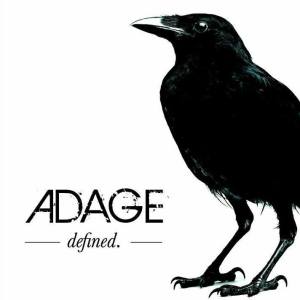 Really we just want to give a big shout out to the whole Pavement Entertainment team and thank them for helping Adage really get the ball rolling. We would also like to thank all of our fans. You guys are what help make this adventure so awesome for us. We are totally stoked about our EP “defined” hitting the market on Aug. 19 and look forward to seeing you guys on the tour that will soon follow!