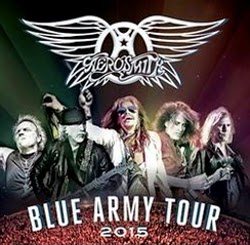 Aerosmith rolled into Evansville Indiana last night and what a freaking awesome sold out show!  I saw people from all walks of life attending it. From little kids to folks that were probably great grand parents!

The opening act was the band “Living Colour”! Everyone should be familiar with their hit “Cult of Personality” from 1988. Not to bore the average reader about the musicianship in the band but look them up here. This band is an ensemble of talent!

What I liked most about the show was the fact they were having fun at it. Corey, the lead singer got down into the audience and was high-fiving as many people as he could and taking photographs with them while handling the vocals! It’s been a long time since I have seen this happen. He even ran up into the seats in the first level! A topnotch band that was well received!

Aerosmith! So much to say and man what a great band! Joe Perry and Steven Tyler rose up out of the stage in a hail of smoke and fog as the band  kicked into “Draw the Line” and it was one classic new and old Aerosmith song after another! Steven Tyler always the entertainer! He was gyrating all over the stage like an expensive Bourbon street hooker! Aerosmith rolled thru hit and hit. “Love in an Elevator”, Back in the Saddle”, “Cryin”, “Toys in the Attic”, “Dude looks like a Lady” just to name a few! It was  drummer Joey Kramer’s birthday so Steven brought out a cake and the sold out audience sang Happy Birthday to him!

Truly one of the last all American kick ass rock bands! They played their instruments. I didn’t hear anything “flown in”. A real deal of a show!

For the encores, Steven came up out of the floor in a fog of smoke playing a grand piano. He broke out into “Dream on” and Joe Perry stood on top of the piano during the guitar solo! “Sweet Emotion” was the last song of the night! Aerosmith didn’t disappoint. With a catalog of great music spanning 40 years it has to be hard to pick out what to play and what to leave out. I would have loved to have heard “Kings and Queens” but by no means was I not satisfied.

Joe Perry did have several guitar issues throughout the show. It kept his guitar tech busy to say the least. After several false starts on a song  Steven Tyler said “”It sounds fine play that SHIT” as Joe was tweeking his sound on his guitar. 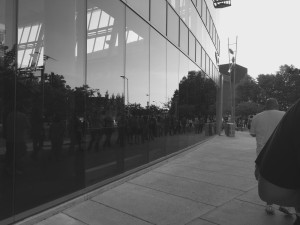 Only drawback I can think of is this. The Ford Center has a great staff. Always polite. Always helpful. The small stadium seats blow. They are too small. I am not tall at all but my knees where almost touching  the people in front of me. When someone had to leave their seat the entire row in the direction they are heading has to stand up in order for them to pass. For a tall or big person, the seats have to be a problem. Zero leg room.Zero walking room. Horrible. Other than that. I am glad they hosted this ROCK SHOW!