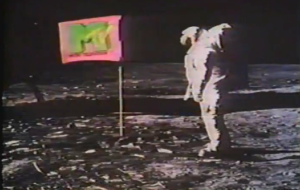 The band Saxon had a semi metal hit way back in the day that had an opening line that went like this…”Where were you in 79′ when the dam began to burst?” Collectively speaking, the same thing happened in 1981 when a new Music Channel signed on for the first time. Who would have known back then that it would permanently change the way we “look” at music. I remember MTV coming to the Evansville/Henderson area and was being “pitched”. I used to have one of “Flair” stick pin buttons that was given away while they were in town.

When I lived at home, my brother and I had MTV on 24 hours a day…We watched the KISS “Unmasking” live. We also watched Iron Maiden’s Debut of “Two Minutes to Midnight” that first aired at two minutes to midnight”. Go figure! Michael Jackson”s mini horror music video “Thriller” too. Which seemed to air every hour on the hour. It was an exciting time not knowing which video was next to air! It could be a metal band like “W.A.S.P. or an 80’s pop band like “Wham!”. You young kids have no idea what you missed. The hairstyles, the music, the clothes,the girls, the culture. It was an awakening! Just like when the 60’s revolution started! Did you “Catch the wave!”

Check out original VJ Martha Quinn as she looks back on that historical event!

This was the first video to air on MTV. They had no idea how prophetic at the time it would turn out to be.