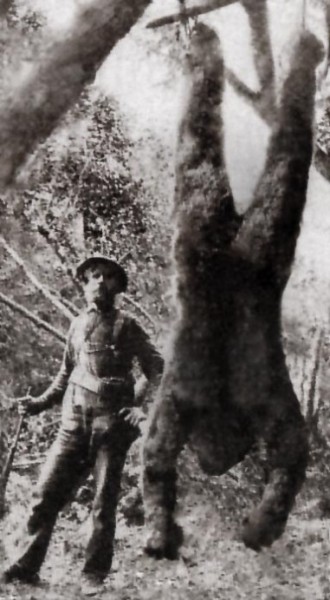 Jessh, it’s 2012 almost 2013 if the Mayans‘ are wrong and the elusive Bigfoot still won’t allow photographs of himself. Hell, if he exists in reality, other than “in the pot” as my brother in rehab says, he has kept his face hidden better than KISS did back in the 70’s! So here is another viral  video. It’s either fake, or a gorilla or another clown in a suit… I will believe in Bigfoot when one is captured and confirmed or he knocks on my door and introduces himself.

I will admit I am intrigued and would like to believe but there is zero evidence. Of course there are people’s words that they have seen it and they may whole hardheartedly believe it. I won’t take that away from them but there is no actual hard proof. Fake foot prints, grainy ass videos or still photographs, broken twigs and sounds at night don’t cut it. Also as seen on a TV show some Indian dude with a unknown tooth he won’t allow to be examined because “it’s sacred” but he thinks it a Bigfoot tooth. How lame is that…?

Just to be clear  I am not poking or making fun of anyone that believes in  Bigfoot. I just need proof in the pudding. Show me the “fly” for myself or else I am not buying it.

anyway, here is the vid…