Recently James Lowe from Kickacts Magazine sat down with one of the very exciting artists on the scene! 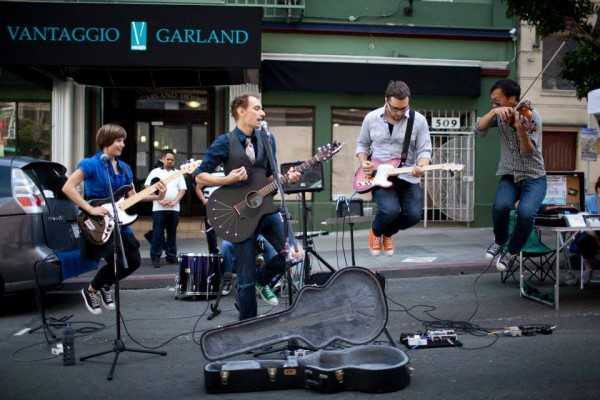 1. Tell us a little about yourself and your band and were you can be found at on the web.

Joey: I am a drummer. My band can be found many places on the web.

Joey: I think Buddy Rich said it best: “I consider every drummer who played before me an influence, in every way.”  Also, I really dig Hall and Oates!

Mike: I think you mean Garfunkel and Oates. I’m a huge fan of Louis Armstrong – Satchmo knew what was up.

Joey: If you are just getting started, decide why you are getting into it. If you are doing it because you want to get serious about it, you better start with the basics – scales, technique, rudiments, etc.  Then practice your ass off.

Mike: Love what you love, don’t hate what you don’t. You’ll get way further being positive and supportive than you will believing you’re above anyone. The moment you start thinking “I deserve to be more successful than X band…” you need to seriously reevaluate what you’re doing.

Joey: When I was in high school, I took a one-time gig as a member of a “Mickey Mouse Marching Band” for some well-off little kid’s birthday party. There were five or six of us in the “band.”  We had to march into the room playing the theme to the Mickey Mouse Club, perform a Disney medley, and finish by leading everyone in the singing of “Happy Birthday.” We wore Mickey Mouse ears and marched around a private little room in the back of a Chinese restaurant. I was playing the bass drum, and I’m pretty sure I bumped into several of the family members during our performance.

Mike: We were playing a “Music After Dark” series that followed the City’s sponsored “Music in the Park” free concerts downtown. The shady promotion company involved forgot to send a sound person who, y’know, could actually USE the equipment. He seriously looked like if he touched the console for more than five seconds that it would electrocute him or something. So about 3 songs in they tell us forgot they were supposed to hang a banner behind the stage with the name of the radio station that sponsored the show and cut into our set time in order to do so. 2 songs later they tell us they don’t know how to handle the equipment and that we have to turn it down ourselves. I say “are you fucking kidding me?” and they tell us to get off stage. Joey goes outside to find the guy that runs the company, he’s having a beer with his buddies, and gives him the 3rd degree about how unprofessional his organization is. I get a call from the radio station manager the next day apologizing and saying they fired the promotion company; turns out he was sitting right next to the guy as Joey was tearing into him.

Joey: I don’t draw boobs anymore, but I do consider myself somewhat of an artist.  I got to help with the album art for our upcoming release, and I’ve been working on art for an eventual music video.

Aside from that, I spend much of my time sleeping (approximately 1/3 of my life).

Mike: I used to steal restaurant menus; I hang them up in my kitchen. I don’t know WHY I started doing this, I just did.

Joey: We need more people who want to come out and see bands.

Joey: It might be a lack of viable venues, the cost of shows in a down economy, or the fact that, following the Napster generation, most people expect music to be free and easily accessible from the comfort of their own homes. It might also be that the musicians who grew up on bands such as Nirvana and Pearl Jam are not focused on a “stage show,” and that this makes people less excited about going out to see live music.

Mike: Like, we have a good community going in our area right in terms of venues and bands, but yea – people don’t seem to understand that in order for musicians to survive these days you have to go see them live.

Erin is from Texas.

Abe once tried out as bassist for our band.

Mike’s jaw is made mostly of synthetic material after an unfortunate face-punching incident.

Mike: Joey once got called in for Jury duty and said “Don’t worry, I’ll get excused because my dad was a cop” and comes back instead saying “I’m the foreman…”

Mike: Real talk: While I feel old a LOT of the time when interacting with our musical peers, this is not one of those times. I’ve never seen Gilligan’s Island. I know the premise and all, but it’s way before my time I never had Nick at Nite.

Joey:  I would like to take this opportunity to remind everyone that all of the molecules in your body existed long before you burst into consciousness in your current form, and that those same molecules will eventually become part of some other sentient or static element of our world. Life is infinite and simultaneously in infinite peril of inexistence. We are all responsible for our own actions, even if in the end they matter little in the bigger picture. You can chose to create or destroy, but those choices will ring out through the cosmos.

Mike: Too much Neil deGrasse Tyson for you, man. But seriously – if you’ve never heard of “Skeletor is Love” please go google it. So worth your time.

Thanks James, this has been a blast! Oh, did you end up picking up that giant map-wall hanging?